I love writing. I write for a living. God only knows why but someone has always been willing to pay me for this privilege for over a decade now. So it is not the teenage dream of writing for Just 17 and Smash Hits (I never got to interview Marti Pellow but Terry Wogan did tell me off once). You are more likely to catch me poring over scientific papers and trying to dumb them down enough for anyone who was not personally tutored by Newton or Hawking. My musings are more incontinence focused than in with the stars. Don’t tell anyone but I even wrote a book in my early 20s (the shame!). A sex, drugs and rock ‘n’ roll affair….. that rather lacked the sizzle. Yet it was great fun. Even when my dad died one of my first thoughts was “oh I can write about this!”

Yet one thing I find difficult to write about is life with my boy. My beautiful little fighter who has defied the odds many a time and whose future is still completely uncertain.

Is it because I find it painful, or I am an optimist who wants to keep looking forward not back? Is it because I can’t find the words to do him justice? I have tried. I have opened many a blog account – spent hours writing – then closed them (I usually forget the passwords so have to open a new one).

The truth? I think that his story is boring. Of course it is beyond epic for my husband, my children, my immediate family and me. But it is a boring story all the same. A child is born with difficulties, has lots of tests, a few peaks of drama when he ends up in intensive care during long winters, some more tests, the odd blanket joyful texts (he sits!!! he sits!!!), more tests, decides doesn’t want to sit, tales of mean medical staff, more tests, more tests, more tests…… on and on and on…. blah, blah, blah blah!

I sometimes feel eyes glaze over when I bring up his name (here she goes again) and watch if that well meaning lady in the supermarket is actually going to stop to listen to the answer when she throws over her shoulder a “how’s that boy of yours?” Because you have to stop and have a good fifteen minutes to spare if you want the real answer. Because he is good but he is struggling, he is well but he is often in pain, because he is now eating but doesn’t understand hunger, he is getting stronger but look with your own eyes he is two and can’t sit up properly. While other boys his age are running with the wind in their hair, my boy is doing a triple roll to the living room curtains to put his feet in the gap of the lining for kicks.

And the medical profession is no better. I think he is now what is known as a ‘heart sink’ patient. He is complicated, time consuming and has exhausted all means of testing. He turns up every 4-6 months with what boils down to a list of really common, unexciting ailments (low muscle tone, reflux, allergies, glue ear, the most boring of heart defects atrial septal defect, failure to thrive, learning problems, gross motor and speech delay).

Chin up! Get on with it! Worse things happen at sea! Keep it light!

Well this is how boring life with him is:

Don’t get me wrong life is a trillion times better than it was. The dark days of testing for every fatal, life-limiting disease in the book (from cystic fibrosis to leukodystrophy) are behind us. A cold does not now mean a hospital stay (I hope!). We no longer spend our evenings in tag team vomit mopping. I no longer have four appointments every week. He is not changing much but we are. Life is chugging on. Peace, hope, acceptance and understanding are trickling through.

And for every bad day we have had, there have been so many more amazing ones. He has given us more than he has ever taken away. The best sound in the world is his giggle, he has three jokes and he works them hard and he is trying every single minute of his life to become the best that he possibly can. What else can a mother wish for.

This is for all the families of children with undiagnosed conditions on Undiagnosed Awareness Day. These are the families that never find our children and their extensive variety of problems ‘boring’. Just the opposite in fact. 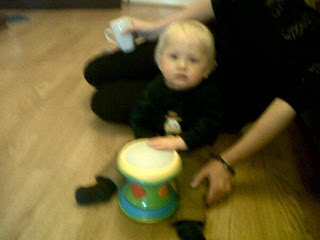