In early 2010, a panel of experts from Oxford University published a paper in the Lancet that said that a mother’s instinct is usually right if she believes her child may be dangerously ill. In fact, a parent’s instinct that something is wrong was added to a list of signs that every doctor should look for when dealing with sick children. Anyone who has rushed their child through A&E with a high temperature, breathing problems, or a strange rash would remind medics to ignore a mother’s instincts about her child’s health at their peril!

There are some sceptics that don’t believe in this strange bond between mother and child. Yes, it is the same one that makes you see danger everywhere once your child is born. You won’t leave the patio door open while you make a cup of tea in the next room in case an eagle flies in and steals your baby off the floor. Windows aren’t places that let in fresh air, but evil murderers that lure children towards them; TV units are suddenly brandishing sharp-edged claws; and that innocent wardrobe is just waiting for the right moment to topple forward, doors ajar, and hold your child inside to a devilish ransom. Strange scenarios play like warped video footage at the most benign moments of the day. Any sane person (without children) would have us locked up for our paranoid thoughts and throw away the key.

But we need it. We have a survival instinct that tells us not to play peek-a-boo with a tiger or smoke in a petrol station, so why not an inner alarm bell that lets us know when all is not well with our child.

Yet when you have a complicated child (a child that most likely has a “syndrome”) getting a doctor to take your gut instincts seriously is an uphill battle. When presented with a child that is constantly being sick, failing to thrive and succumbing to infection after infection, it is too easy for a doctor to look for a disorder that is as rare as hen’s teeth. When actually the problem could be quite simple – and more importantly – treatable.

Gabe has issues. It is true. They are probably neurological and genetic-based. We may or may not find out the cause and the impact of these neurological deficits on his life long term are anyone’s guess. But I know with the certainty of a mother that every issue he has experienced (medical or sensory) has been compounded by his inability to consume adequate calories to sustain himself.
I have early pictures of Gabe that I hate as he was starving in them (not starving as in ‘I can’t wait for my cheese on toast’ but starving as in malnutrition). Not only was he not taking much in, but what he was taking in was hitting the stomach, pulling tongues at the finger-like-threads designed to strip the food of its nutrients, and passing back out in a speedy fashion. I once timed a banana pass through his system in 20 minutes. What is this strange affliction, I hear you say? Is it a metabolic disease with devastating consequences, an immune deficiency disorder, or a structural defect in the digestive system?
Well no. It is a good old fashioned milk allergy. 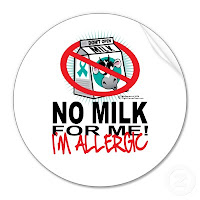 This is an allergy that affects up to 5% of children. Something that was never considered in my boy. It was a light bulb moment that made me realise that Gabe’s symptoms were worse when he had gluten and this observation finally made a doctor sit up and take notice of Gabe’s failure to thrive. A referral to a gastroenterologist and a detailed history led to a clinical diagnosis of a milk protein and gluten intolerance (possibly coeliac).
I can’t tell you the number of times that I had brought up the failure to thrive symptoms at appointments only to walk out with promises of yet more tests for strange diseases. I even threw two health visitors out of my house when they kept saying that no paediatrician would be worried by weight loss unless the child fell through two percentiles (he was failing to stay on the 0.4 line). “Have we reassured you?” they kept saying smugly. No – now put down my coffee mug and get the hell out. No one would listen to me as this baby threw up everything that went into his mouth and would fight you with an inhuman strength to fend off an approaching spoon. Then someone had the genius idea to give him overnight tube feeds. I recall thinking as he coughed and splattered out this pumped in poison – again and again – continuously throughout the night that THIS WAS ALL WRONG.
A breakthrough came with the prescription of neocate, but the damage was already done. He hated food. He didn’t trust it and it was a long road to get him to tolerate anything orally. But alleluia – the reflux, vomiting and chest infections all but disappeared. Things got so much better. Yet something was niggling. something was still VERY WRONG.
And I was right. Something was. Not only had it taken the medical profession 15 months of his precious life (which he suffered for) to diagnose something as common as a milk allergy, no one had actually looked into his mouth. This boy just couldn’t latch on to a bottle properly and would be exhausted after drinking a couple of ounces. Some days he would be feeding for half an hour and you would be elated to find he had barely pulled 20ml through the teat. A frantic google search led me to tongue ties. He didn’t seem to have one, but I noticed he couldn’t move his extensively. ENT promised to investigate when they fitted some grommets. It turns out that I was right. There was a tongue tie, but not only that- there was a upper lip tie. Something that would make it harder for him to feed. And on top of his low muscle tone – something that would have made feeding a significant challenge.
It is early days and his ears and mouth are sore, but already he is holding a bottle tighter in his mouth and drinking faster. I am fluctuating between excitement that we might have had another feeding breakthrough and fury that no one discovered or looked for these things before now.
If both the allergies and the ties had been picked up at his first hospitalisation at three months old, would he be a different child now? Would he have had more strength to wrestle better with his low muscle tone? I guess we will never know. But one thing this little lesson has taught me is to push and push for answers and never give up as the smallest things might make the biggest difference. Also it is true – Mummy does know best! Now eat up those greens. And yes, I do need those new shoes.