And kind of special, Popular posts

That is all it took.
One. To end 59 years of life.
One. A boy showing off to his friends.
One. Five children left without a dad.
One. A wife without her husband and friend.
One. Nine grandchildren. Six never met.
One. Four more weddings with an empty seat at the helm.
One. Eleven Christmas morns with a lingering sense of loss.
One. Years of what ifs, should haves, wish we hads.
One. A group of friends questioning.
One. A son, who waved goodbye hours earlier, left wondering.

In some ways I can’t believe I have blogged about my journey with Gabe for six months now and gave no mention to my lovely Dad. My dad who 12 years ago in January walked home for his tea after some afternoon drinks with friends and paused to tell a group of teenagers off for throwing stones at a house. An intervention that cost him his life as one of the group punched him in the face so hard he fell and smashed his head open on the kerb.

Just one punch. One moment. One action of one. And so many lives changed forever more.

We as a family have learnt many lessons since that fateful day and the biggest?
That wistful thoughts are worthless.

Wondering what would have happened if he’d left his friends a little later or a little earlier. Yearning to go back in time and stop him going out that day or even to be there holding his hand on that final walk when he never made it home. Praying that he hadn’t died alone on that street as a group of scared teenagers scattered and fled. Wanting one more conversation, one more hug, a last smile. A chance to say good bye and I love you.

Wishing it had never happened at all.

Wishing, wishing, wishing.
It takes a while but we got there.
You just can’t go on hoping, longing, hankering, pining for things that can’t be undone.
It is the fast track to madness.

I still play the wistful game with Gabe. It is hard not to. I sometimes get a little pang at times when I see other three year olds or those even younger running and playing. I get a little melancholy when I think he should be tucking into roast dinners and we struggle still with orange mush. I long to see his little body work more effectively. But like my grief, it is subsiding all the time. It is not as painful. 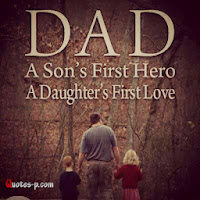 Every day this man, a long time now departed, gives me strength to deal with whatever life with Gabe (and life in general) can throw at me.

You see this is what he and his tragic death taught me:

Life usually gets better.
Good stuff does happen.
Just when you think it can’t get any better….
Do you know what? It blinkin can.