An excerpt from the early memoirs of Prime Minister Gabe, leader of the free world. Then aged 3 and three quarters. A letter to his first ever school friend Dylan.

Yo Dylan!
How are you doing my main man? I’ve had the most fabbulious summer holiday but have missed hanging out with you my buddy. No one seems to wanna play with mud or smear crazy soap over their head with me. When we go back to school tomorrow we are not going to be the little ones anymore. We are going to rule the school like the Fonz or the T-birds (I’ve been watching dodgy 3am telly with my mum again). Babies smell. We are gonna be like cool dude pre-schoolers. Anyone from the Nursery Year (aka the losers) coming on to our bit of the carpet better beware! Or have Peppa Pig books to give us as tokens of their loyalty.

I’ve been having a busy summer and like found out loads of new stuff that I can do. Do you know what has been the bestest fun – winding my mummy up on the most epic scale. You’ve got to get in on some of this action mate – it’s been cracking me up. Let me tell you some of the coolest tricks I’ve learnt.

1. Demanding the phone at all times

This one has legs but I’ve upped my game of late. As soon as she brings out her phone and starts the plinky plonking I’ve perfected full on OUTRAGE. If I screech really loudly in her ear and arch my back lots then she tends to give in and give it to me. And this is the best bit. I’ve worked out that if I press the button at the top it allows me to make the ringing sound and hear all the voices go “hello, hello, hello”. It cracks me up. Remember though even when you’re a bit bored of it – don’t give it back. Hide it behind you – she’ll never find it. And if she goes to snatch just hold it above your head and let it crash down – it’s great as it does a brill smash all over the floor.

2.  Switching off the TIVO box in the middle of The Good Wife or Game of Thrones

I loves this one. l am the master of this. Wait until your mummy is all comfy on the couch with a cup of tea. Then come out of no where like the Brotherhood without Banners (gosh Game of Thrones is fabby) and bum shuffle really fast to press the big red button on the box under the telly. Wait until she is all comfy once again and thinks you are playing with your toys and then sweep in again. Top laughs.

3. Waking up just as she goes to bed

Tell me this – how come we are little and have to sleep in a bed all by our own and they are big and get to share. What the blink. I am not having that. I don’t mind having a little snooze in my cot while they potter doing their thing downstairs but once they are climbing into bed – I want in. Sometimes they try and leave me but if you cry like really really REALLY loud they break. If that fails mate – just do a poo. That always works a treat. Once in the middle of their bed, make yourself all comfy by putting your head right next to mummy’s nostrils and putting your feet up on her belly. Again wail loudly if she tries to move. It’s well good. Everyone gets a lovely sleep.

4. Refuse outright to go in the pram, highchair or even on the floor

Now listen carefully as this one is important and a skill I’ve only recently acquired. But it’s worth its weight in gold. You know how sometimes you just don’t wanna go in the highchair or whatever because you are busy turning the TIVO box on and off – well just don’t let them do it. It is ace. Make your body go all straight and stiff so not even the strongest man in the world can bend you (which just for the record ain’t daddy). Watch out though as mummy sometimes pulls a fast one and uses my straightness to sneak in some standing practise. And we know that’s physio – and physio should be resisted on all levels. Just cause.

5. Pulling off glasses, hair and everything that is neatly stored on reachable shelves

I didn’t like touching things before but now it is brill. You can use your hands to do stuff like pull off mummy’s glasses or sunglasses and throw them on the floor (she especially loves it when out and about). Just before she tries to put you back in the pram, change tactics and start pulling her hair especially those little fluffy ones at the back of her neck. If you are dumped on the floor, use your time wisely to go room to room pulling all the DVDs and books off the shelf. Someone will always kindly put them back so you can go and do it again a bit later. Don’t forget if you see any type of cup on the floor grab it quick – you get a gold star if you manage to pour out any of the wet stuff especially on your head. It is very mega amaze if you do it to the perfumed drink. Mummy does a funny squeal – it is beyond bonkers. 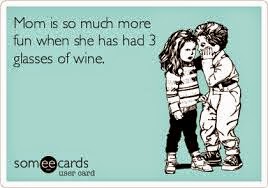 Obvs there is loads more annoying stuff to do like refusing to eat any orange mush until they put on In the Night Garden and eating so slowly you get to watch two episodes (result!) but I’ll show you all the rest of my tricks in person tomorrow.

Love Gabe (aka the Fonz of the Early Years Unit)