I have to confess I have been feeling a bit less youthful in recent years. I’ve tried to figure it out. Could it be because I need to stop flicking through my phone when I wake up in the night (such a loser) or because I should have a bit less wine and a bit more water (or even more watery wine – known locally as a spritzer).

But then it hit me. I am feeling old because I am now *ahem* older.
I am going to let you in on a secret.
But you must keep it to yourself.
Are you sure you can? I know you like a little bit of a gossip!

Here it comes…
Are you ready?
In 6 weeks’ time I am waving goodbye to the flirty thirties and I am about to enter with a heavy (ageing old bag) heart the naughty forties.

I know it’s hard to believe what with me looking like the epitome of chic youthful glamour at all times.

But as I say goodbye to this decade I have a few burning questions to ask:

1. Which joker called them the dirty thirties?
Because they are dirty but not for the reasons I hoped. 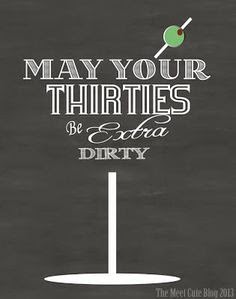 What started well with an amazing girls’ trip to Amsterdam followed by a summer proposal from the boyfriend descended steadily and gradually into what shall for evermore be known as the Decade of Dirt. Everything pretty much begins and ends with poo. Or snot. Or grot. Then pee. And then back to poo some more. Kids are gross. No one told you that when you chuckled at your “funny” birthday cards on your 30th birthday and then started flicking through the glossy wedding mags. Oh no. Not one person mentioned the sewage-like smell that fugs up your baby years when you were sniffing Jo Malone scents in feffing Selfridges as you spent your Dirty Flirty Thirty birthday vouchers.

2. Where do all the old bags go?
I have been quite content to snuggle down with a Chinese takeaway and Simon Cowell for most of the past 10 years. And the advent of the box set has sealed the fate on any instigation of a trip to the pub. Yet there has been a bit of a renaissance of late as my gang from school starts hitting the geriatric heights of 40 too. We want to celebrate and mark this landmark birthday, but it has presented itself with a whole host of dilemmas.

Where does one go when they are starting to think about buying shares in Botox? Yes – there is the local pub or a nice (yawn) restaurant, but we want to shake our timeworn thang without looking like we are auditioning for Cougar Town. Side shuffling in a trendy late night den a few weeks ago in what was the first of a batch of 40th birthday celebrations, I surveyed the 18+ years crowd and resisted the urge to ask if their mothers knew they were out. We sealed our antique status when we moved on to a quieter bar up the road and congratulated ourselves on the fact we’d remembered to bring our own tissues for the loo.

3. Why does my metabolism now sit on its arse and demand cake
I made it work hard in 2006 and then again in 2007 when I wanted to snap back to some vague semblance of a woman rather than a bowling ball. It was especially flogged big time after my little girl was born as I had a hen do in Marbella when she was a mere 4 months old. In a revenge attack in 2010 after Gabriel she flicked two fingers up at me and did a go slow. Now to get the mean old cow working you actually have to make her do lots of exercise. We all know that requires some effort so we’ve just called a truce and share Double Deckers.


4. How can I subtly ditch all these younger mates? 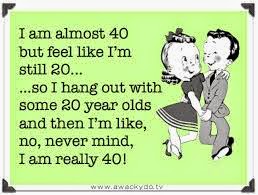 I don’t know what has happened. A heap of my mates are now younger than me. Man alive they are ageing me with their early/mid thirties ways. I’m suddenly the old hag of the pack. I have lost a few peers from my age group along the way mostly for being a baby bore or forgetting to text people back for a couple of years. You can read my How to lose your friends guide here (I am obvs doing a series here). I still stand by the line “for the fair-weathered few that I have lost along the way, I have retained and gained friends worth a billion times more” but I just wish you were all a bit more wrinkly and not so jaunty (get in the sun girls quick so we can be twins. Go on I’ll time you!)

5. Why am I getting poorer?
Why do I have less money now than I did a decade ago – everything is allocated. Even if there is anything spare they go into “pots” called the holiday fund or the “will we ever get a feckin kitchen extension” account. Every time you buy shoes you guiltily think this could go towards a day out with the children (just before you think blow that and buy them anyway).

6. What’s going on with the growing population of slugs?
I can’t stop worrying about random crap. It is like my brain has woken up to the fact that yes the world can be one huge, dark and scary place but feck it I am going to worry about important stuff like slugs (is it just me but is there an alarming amount of slug slime on the streets today; are they going to take over the world). Yes there is widespread poverty and war, but I’m going to ponder on what will happen if I call the Street Cars number in Coronation Street (I may have done this) or I am going to lie awake in the night fretting about whether I have missed the start of the new series of Scandal (have I, have I?).

7. Did I get any wiser?
Unless discovering that you do actually have to sand the paintwork before glossing it (I thought that was an urban legend) and even “outdoor” plants need water (who knew) I don’t think I have any wisdom to impart. Well maybe just this: never eat yellow snow.

Forty is the old age of youth; fifty the youth of old age.
Victor Hugo

34 Comments on How to feel like an old hag